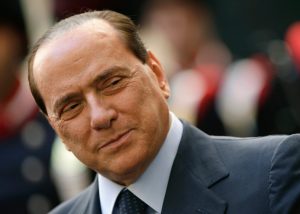 Italy’s then Prime Minister Silvio Berlusconi looks on during a meeting with Palestinian President Mahmoud Abbas at Chigi palace in Rome in this October 7, 2009 file photo. Berlusconi said on December 8, 2012 he will stand to lead Italy for a fifth time, challenging the leftist frontrunner a year after being forced to resign amid a sex scandal and a debt crisis. REUTERS/Tony Gentile/Files (ITALY – Tags: POLITICS ELECTIONS HEADSHOT) ITALY-BERLUSCONI/